George and Harold have created a new breed of justice—one that is part dog, part man, and ALL HERO!

If your child just can’t get enough of the laugh-out-loud plots and fun-filled illustrations of award-winning author Dav Pilkey, then we have you covered! Here is a list of suggestions while you wait for the next installment in this over-the-top series that will have readers of all ages giggling from start to finish! 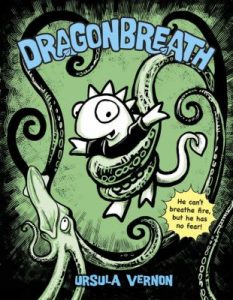 Danny Dragonbreath is the only mythical creature at a school filled with reptiles and amphibians. He can’t breathe fire like normal dragon. The school bully keeps stealing his lunch. And now Danny has to rewrite his report about the ocean and use, ahem, actual research. His loyal but nerdy best friend Wendell suggests the library. But Danny has a way better plan.

The Bad Guys by Aaron Blabey 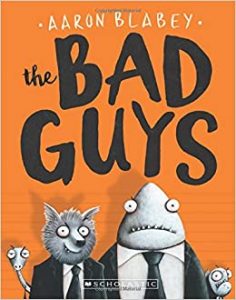 They sound like bad guys, they look like bad guys . . . and they even smell like bad guys. But Mr. Wolf, Mr. Piranha, Mr. Snake, and Mr. Shark are about to change all of that…Mr. Wolf has a daring plan for the Bad Guys’ first good mission. They are going to break two hundred dogs out of the Maximum Security City Dog Pound. Will Operation Dog Pound go smoothly? Will the Bad Guys become the Good Guys? And will Mr. Snake please stop swallowing Mr. Piranha?! 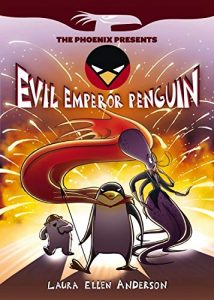 Far away in the icy wastes of Antarctica lives a warm and cuddly, kind-hearted penguin who only wants to do good in the world . . . NOT! This is no ordinary penguin. This is . . . EVIL EMPEROR PENGUIN! And he wants to take over the world! Of course, every evil ruler needs a sidekick and a minion, and Evil Emperor Penguin is no different. That’s why he has Number 8, a very polite and thoughtful octopus who knits, and Eugene, the incredibly cuddly abominable snowman who loves hugs. Join this fearsome team of Evil as they try to take over the world–and obviously, destroy it–but get waylaid by evil cats, rogue farts, killer plants, and visiting sisters. 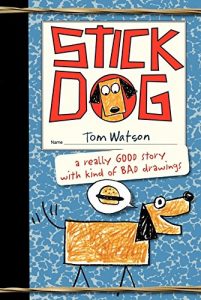 Introducing everyone’s new best friend: Stick Dog! He’ll make you laugh…he’ll make you cry…but above all, he’ll make you hungry! Follow Stick Dog as he goes on an epic quest for the perfect burger. With hilarious text and stick-figure drawings, reluctant readers will eat this one up! Perfect for fans of such series as Dog Man, Big Nate, Timmy Failure, and Diary of a Wimpy Kid. 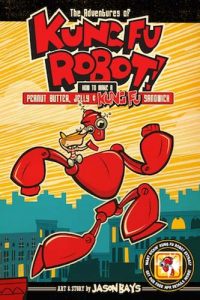 The engaging pursuit for the perfect peanut butter and jelly sandwich can’t be contained on the page–it leaps onto your mobile screen with the FREE interactive Kung Fu Robot companion app for an innovative reading experience. Based on the best-selling app, this madcap graphic novel follows the adventures of a nine-foot tall red robot who loves kung fu and his 9-year old sidekick, Marvin, as they rush to rescue the city from the clutches of their evil arch-nemesis, Kung Pow Chicken, and his army of android ninjas from destroying the city’s peanut butter and jelly supply. Kung Fu Robot must save the day . . . and their lunches!

New Arrivals: January Our Most Anticipated YA of January/February!