Looking for some summer reading recommendations, checkout these thrilling new reads. Plus, the Adult Summer Reading Challenge is underway. Make sure you enter for a chance to win some awesome prizes!!! 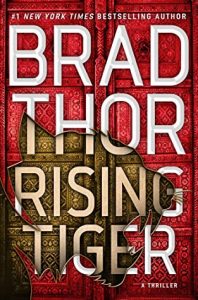 An unprecedented, potentially nation-ending threat has materialized on the world stage. Fearful of the global consequences of engaging this enemy, administration after administration has passed the buck. The clock, however, has run out and doing nothing is no longer an option. It is time to unleash Scot Harvath.

As America’s top spy, Harvath has the unparalleled skills and experience necessary to handle any situation, but this assignment feels different.

Thrust into a completely unfamiliar culture, with few he can trust, the danger begins mounting the moment he arrives. Amidst multiple competing forces and a host of deadly agendas, it becomes nearly impossible to tell predator from prey.

With democracy itself hanging in the balance, Harvath will risk everything to untangle the explosive plot and bring every bad actor to justice.

Like millions of people around the world, Jeremy Logan (famed enigmalogist, or investigator of unexplained things) has grown to rely on his incredible new tech device. Made by Chrysalis, the global multi-billion-dollar tech company, the small optical device connects people in a stunning new way, tapping into virtual reality for the first time on a wide scale.

And yet, when Logan is summoned by Chrysalis to investigate a disturbing anomaly in the massive new product rollout, Logan is shocked to see the true scope of the massive company. He also quickly realizes that something in Chrysalis’s technology is very wrong, and could be potentially devastating. The question is what, and where is the danger coming from? In Lincoln Child’s wildly inventive new novel, high tech comes to life alongside the myriad dangers it poses, making for one of Child’s most infectious, entertaining thrillers to date.

Every day without fail, Travis Devine puts on a cheap suit, grabs his faux-leather briefcase, and boards the 6:20 commuter train to Manhattan, where he works as an entry-level analyst at the city’s most prestigious investment firm. In the mornings, he gazes out the train window at the lavish homes of the uberwealthy, dreaming about joining their ranks. In the evenings, he listens to the fiscal news on his phone, already preparing for the next grueling day in the cutthroat realm of finance. Then one morning Devine’s tedious routine is shattered by an anonymous email: She is dead.

Sara Ewes, Devine’s coworker and former girlfriend, has been found hanging in a storage room of his office building—presumably a suicide, prompting the NYPD to come calling on him. If that wasn’t enough, Devine receives another ominous visit, a confrontation that threatens to dredge up grim secrets from his past in the Army unless he participates in a clandestine investigation into his firm.

This treacherous role will take Travis from the impossibly glittering lives he once saw only through a train window, to the darkest corners of the country’s economic halls of power…where something rotten lurks. And apart from this high-stakes conspiracy, there’s a killer out there with their own agenda, and Devine is the bullseye.

“Portrait of an Unknown Woman” by Daniel Silva

A gripping story of deception in the world of international fine art. Restorer and spy Gabriel Allon embarks on a dangerous hunt across Europe for the secret behind the forgery of a 17th century masterpiece that has fooled experts and exchanged hands for millions. Bestselling author Daniel Silva follows up his acclaimed #1 New York Times bestsellers The Cellist, The Order and The New Girl with this stunning new novel.

Celebrate Canada! Travel is Back!