Looking for something new to read this winter, check out these popular new releases. 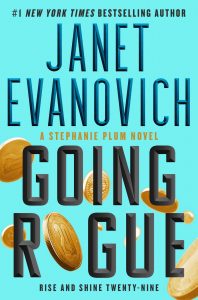 Monday mornings aren’t supposed to be fun, but they should be predictable. However, on this particular Monday, Stephanie Plum knows that something is amiss when she turns up for work at Vinnie’s Bail Bonds to find that longtime office manager Connie Rosolli, who is as reliable as the tides in Atlantic City, hasn’t shown up.

Stephanie’s worst fears are confirmed when she gets a call from Connie’s abductor. He says he will only release her in exchange for a mysterious coin that a recently murdered man left as collateral for his bail. Unfortunately, this coin, which should be in the office—just like Connie—is nowhere to be found.

The quest to discover the coin, learn its value, and save Connie will require the help of Stephanie’s Grandma Mazur, her best pal Lula, her boyfriend Morelli, and hunky security expert Ranger. As they get closer to unraveling the reasons behind Connie’s kidnapping, Connie’s captor grows more threatening and soon Stephanie has no choice but to throw caution to the wind, follow her instincts, and go rogue.

“The Prisoner” by B.A. Parris

Amelie has always been a survivor, from losing her parents as a child in Paris to making it on her own in London. As she builds a life for herself, she is swept up into a glamorous lifestyle where she married the handsome billionaire Jed Hawthorne.

But then, Amelie wakes up in a pitch-black room, not knowing where she is. Why has she been taken? Who are her mysterious captors? And why does she soon feel safer here, imprisoned, than she had begun to feel with her husband Jed?

A year has passed since LAPD detective Renée Ballard quit the force in the face of misogyny, demoralization, and endless red tape. Yet, after the chief of police himself tells her she can write her ticket within the department, Ballard takes back her badge, leaving “the Late Show” to rebuild the cold case unit at the elite Robbery-Homicide Division.

For years, Harry Bosch has been working a case that haunts him but that he hasn’t been able to crack—the murder of an entire family by a psychopath who still walks free. Ballard makes Bosch an offer: come work with her as a volunteer investigator in the new Open-Unsolved Unit, and he can pursue his “white whale” with the resources of the LAPD behind him.

The two must put aside old resentments to work together again and close in on a dangerous killer.

“A World of Curiosities” by Louise Penny

It’s spring and Three Pines is reemerging after the harsh winter. But not everything buried should come alive again. Not everything lying dormant should reemerge. As the villagers prepare for a special celebration, Armand Gamache and Jean-Guy Beauvoir find themselves increasingly worried. A young man and woman have reappeared in the Sûreté du Québec investigators’ lives after many years. The two were young children when their troubled mother was murdered, leaving them damaged, shattered. Now they’ve arrived in the village of Three Pines.

Gamache and Beauvoir’s memories of that tragic case, the one that first brought them together, come rushing back. Did their mother’s murder hurt them beyond repair? Have those terrible wounds, buried for decades, festered and are now about to erupt? As Chief Inspector Gamache works to uncover answers, his alarm grows when a letter written by a long dead stone mason is discovered. In it the man describes his terror when bricking up an attic room somewhere in the village. Every word of the 150-year-old letter is filled with dread. When the room is found, the villagers decide to open it up.

In unsealing that room, an old enemy is released into their world. Into their lives. And into the very heart of Armand Gamache’s home.