Fall is definitely here!!! Perfect time to escape the cooling weather and curl up with a good book. Looking for something new to read, check out these latest arrivals. 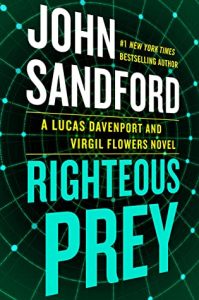 “We’re going to murder people who need to be murdered.” So begins a press release from a mysterious group known only as “The Five,” shortly after a vicious predator is murdered in San Francisco. The Five is believed to be made up of vigilante killers who are very bored…and very rich. They target the worst of society—rapists, murderers, and thieves—and then use their unlimited resources to offset the damage done by those who they’ve killed, donating untraceable bitcoin to charities and victims via the dark net. The Five soon become the most popular figures on social media, a modern-day Batman…though their motives may not be entirely pure.

After a woman is murdered in the Twin Cities, Virgil Flowers and Lucas Davenport are sent in to investigate. And they soon have their hands full–the killings are smart and carefully choreographed, and with no apparent direct connection to the victims, the Five are virtually untraceable. But if anyone can destroy this group, it will be the dynamic team of Davenport and Flowers.

Memory man FBI agent, Amos Decker, returns in this action-packed thriller to investigate the mysterious and brutal murder of a federal judge and her bodyguard at her home in an exclusive, gated community in Florida. Things are changing for Decker. He’s in crisis following the suicide of a close friend and receipt of a letter concerning a personal issue which could change his life forever. Together with the prospect of working with a new partner, Frederica White, Amos knows that this case will take all of his special skills to solve.

Judge Julia Cummins seemingly had no enemies, and there was no forced entry to her property. Close friends and neighbours in the community apparently heard nothing, and Cummins’ distraught ex-husband, Barry, and teenage son, Tyler, both have strong alibis. Decker must first find the answer to why the judge felt the need for a bodyguard, and the meaning behind the strange calling card left by the killer. Someone has decided it’s payback time.

During an intense storm in Dark Harbor, Maine, a perplexing murder lands a dead man on Stone Barrington’s doorstep. As secrets swirl around this mystery man’s identity, Stone quickly sets out to unravel a web of cunning misdirections and lies.

Soon enough, he is embroiled in an elaborate game of cat and mouse between the CIA and nefarious foreign forces, including a bewitching new companion who comes under his protection. But when Stone’s actions draw the attention of an old enemy, one who will stop at nothing to prevent the truth from getting out, Stone realizes he may have finally met his match.

“Boys from the Biloxi” by John Grisham

For most of the last hundred years, Biloxi was known for its beaches, resorts, and seafood industry. But it had a darker side. It was also notorious for corruption and vice, everything from gambling, prostitution, bootleg liquor, and drugs to contract killings. The vice was controlled by small cabal of mobsters, many of them rumored to be members of the Dixie Mafia.

Keith Rudy and Hugh Malco grew up in Biloxi in the sixties and were childhood friends, as well as Little League all-stars. But as teenagers, their lives took them in different directions. Keith’s father became a legendary prosecutor, determined to “clean up the Coast.” Hugh’s father became the “Boss” of Biloxi’s criminal underground. Keith went to law school and followed in his father’s footsteps. Hugh preferred the nightlife and worked in his father’s clubs. The two families were headed for a showdown, one that would happen in a courtroom.

Life itself hangs in the balance in The Boys from Biloxi, a sweeping saga rich with history and with a large cast of unforgettable characters.

“It Starts with US” by Colleen Hoover

Lily and her ex-husband, Ryle, have just settled into a civil coparenting rhythm when she suddenly bumps into her first love, Atlas, again. After nearly two years separated, she is elated that for once, time is on their side, and she immediately says yes when Atlas asks her on a date.

But her excitement is quickly hampered by the knowledge that, though they are no longer married, Ryle is still very much a part of her life—and Atlas Corrigan is the one man he will hate being in his ex-wife and daughter’s life.