Scare Up A Great Read This Halloween

Looking for some “spooktacular” reads that you can sink your fangs into?  Well look no further!  Here are some of our newest and creepiest books for those that want to sit back, relax and “carve” some time out for great reading!

Remember, creepiness is very subjective.  A book that may pleasantly delight one person may horrify another! 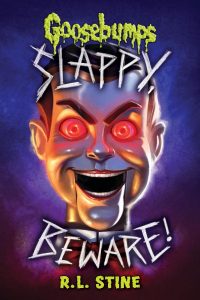 The untold true story of Slappy in a terrifying new special edition!This is Slappy’s world– you only scream in it! But where did he come from? And can he ever be destroyed? Slappy the ventriloquist’s dummy has only one mission in his tiny, deranged mind: do evil every day, all day.

The story of the tragic death of sixteen-year-old Rebecca Strand and her lighthouse keeper father is just an elaborate tale Gabe tells tourists for his summer job on the Toronto Island. Or so he thought.

When his ghost tours awaken Rebecca’s spirit, Gabe is drawn into a world far darker than any ghost story he’s ever heard. Rebecca reveals that she and her father were connected to The Order, a secret society devoted to protecting the world from “the wakeful and wicked dead”–malevolent spirits like Viker, the ghost responsible for their deaths. But now the Order has disappeared and Viker is growing even stronger, and he’ll stop at nothing to wreak chaos and destruction on the living.

Strangeville School Is Definitely Not Cursed By Darcy Miller

Get ready to laugh out loud at Strangeville Middle School, the wackiest ( definitely not cursed ) school ever! This highly illustrated new series is Sideways Stories from Wayside School for a new generation!

Smile! It’s picture day! Except maybe don’t smile, because there’s a glowing lost-and-found box that’s appeared in the cafeteria. Sure, coming to Strangeville Middle has been an adjustment for new kid Harvey Hill, but things seem to be going well. That is, until strange things happen that may or may not be related to a 50-year-old curse (if, of course, curses were real, which they definitely are not).

The spooky summer adventures of the Sinister-Winterbottom twins continue in another gothic mystery: can Theo and Alexander solve the secret of the Sanguine Spa in the little Transylvania Mountains? The second book in the new Sinister Summer series by bestselling author Kiersten White, called “perfect for fans of Lemony Snicket, Edward Gorey, and Roald Dahl,” by Shelf Awareness.

Kidnapped and forced to shovel coal underground, in a half-bombed power station, 12-year-old Luke Smith-Sharma keeps his head down and hopes he can earn his freedom from the evil Tabitha Margate. Then one day he discovers he can see things that others can’t. Ghostly things. A ghostly girl named Alma, who can bend the shape of clouds to her will and rides them through the night sky. With Alma’s help, Luke discovers his own innate powers and uncovers the terrible truth of why Tabatha is kidnapping children and forcing them to shovel coal. Desperate to escape, Luke teams up with Alma, his best friend Ravi, and new girl Jess. Can Luke and his friends get away before they each become victims to a cruel and sinister scheme?

Board Games You Might Want to Check Out This October